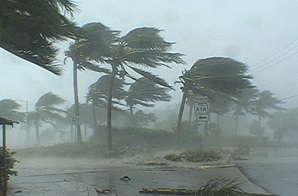 Florida is most known for its beautiful beaches, elegant homes, and great vacation spots.  However, Florida has also endured some of the worst natural disasters to ever hit the country.  This is why storm-resistant fencing and structural design is so popular.  Natural disasters in Florida range from hurricanes, wildfires and even earthquakes. Some of the most memorable ones to ever happen in Florida include the following.

These Natural Disasters Will Motivate You to Protect Your Florida Property

One of the most popular calamities that hit Florida in recent history was Hurricane Katrina. Generally, this hurricane is one of the most expensive natural disasters that the country had to endure – with over $108 billion lost. It’s also one of the 5 deadliest, ranking 3rd overall. After the Bahamas, it made the first landfall in Florida at the Hallandale Beach on August 25. There it caused millions of dollars worth of damage to property and so many lives were lost. The destruction was in part caused by the cyclone, but the levee failure and storm surge were equally to blame.

Post-disaster, leftover homes and buildings were submerged in water for weeks. This caused more diseases to spread and more properties to be beyond salvaging. Even boats from the coast which were carried over 10 to 19 miles into the cities lingered there for days.

In 2006, an earthquake rocked the Gulf Coast. This was the strongest earthquake in the last 3 decades, which was memorable because the south-eastern part of the country seldom experiences quakes, especially at the magnitude of 5.8 on the Mercalli intensity scale. The epicenter was Anna Maria, Florida. Fortunately, the earthquake only lasted for 20 seconds and no lives were lost during the process. The people admitted to feeling the intensity of the quake though, with items falling off shelves and hanging pieces – like light fixtures and framed photos – obviously shaking or swaying.

The Bugaboo fire started on May 8, in Okefenokee National Wildlife Refuge when lightning struck it. From Georgia, the raging fire soon crossed the border of Florida extraordinarily quick. It had merged with other fires that were already happening in the area, making it bigger and harder for firefighters to put out. After a week, it has already covered 120,000 acres and by the third week, it has expanded to 475,000 acres. At month’s end, it was at 564,450 acres. Hundreds of families had to evacuate, annual traditions – like festivals – had to be canceled and millions worth of property was destroyed.

Tips for Noise Proofing Your Office

Get Schooled: The Best Way to Protect Students and Teachers on Campus

Sorry, the comment form is closed at this time.