What Ha-Ha Walls Are and How They Work

As you’ve probably learned by now, there is a multitude of different types of walls around the world. Walls are used for many different purposes, most notably for security purposes, defense of a building or structure, or to protect a particular area from severe weather like flooding. However, another potential threat to personal or corporate property that we don’t talk about as much is that of wildlife. As an ancient means of warding off wandering animals, the French designed a concept called the Ha-ha Wall, which the English adopted quickly and still employ today. Here, the experts at Permacast Concrete Fencing & Walls will show you what these clever structures are and how you might find a use for them in your upcoming projects.

A Ha-ha Wall is a low wall with a trench, or ditch, just in front of it, preventing the ability to climb the wall but maintaining a view of the surrounding landscape. These specifically keep grazing animals out of more formal gardens or yards, while maintaining a beautiful view of the rolling hills or forest. Since a wide view of the landscape allows everything to be seen from a distance, it’s difficult to notice these sunken defenses until you are very nearby. Individuals strolling through the countryside who happened upon these ditch/wall combinations were often taken by surprise, thus the colloquial name “ha-ha” walls. 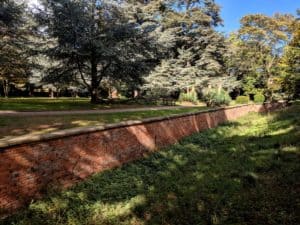 A Fence with a View

Originating in France, ha-ha walls may have also first been called “half-half” walls, meaning they are half-wall, half-trench. Regardless of the reason for their name, the English adopted the use of this structure in the form of deer parks. These parks allowed deer to enter but not leave, keeping them safe from larger animals. The English also found a need to allow sheep to graze their vast fields and countryside to keep the grass short (before lawnmowers were invented). A ha-ha wall prevented sheep and other grazing livestock from entering a home’s more formal gardens or surrounding yard.

More modern use of ha-ha walls has been found in Australia surrounding several lunatic asylums. The low walls allowed patients from inside the walls to feel a sense of openness and space while preventing them from leaving or escaping. In the United States, this concept has not gained much popularity, though a similar structure was created to surround the Washington Monument in Washington, D.C. following the 9/11 terrorist attacks.

If you’re building a community or other structure in a rural area where local wildlife might approach, you might consider a ha-ha wall. While the concept itself is ancient, the lack of these structures in our country will make your project innovative and cutting-edge. Create a sense of safety and protection while maintaining beautiful views of the surrounding area. Talk to the experts at Permacast Precast Concrete Fences & Walls about your next project and discover all the ways we can make your perimeter structure simple, effective, and affordable.

What Is a Rampart, Anyway?